A low-income apartment freed me into exploring subcultures and giving me a  sense of a community.

Navigating through a Google map, the green dot is where I lived from 1998-2001: a mandala like apartment complex in front of the seven lanes of Imperial Highway (one of the longest and busiest roads in Southern California). Isolated from the suburban neighborhoods and exposed to fast streets and industrial buildings, there were many violent incidents of kids hit by cars. The closest crosswalk is indicated in the street view image about a block away, a 300m walk (900ft). This is also where the school bus would stop. I remember we would explore this industrial-playground making skate ramps, climbing roofs, digging in the trash, experiment with smoking, have Styrofoam wars, light fireworks, and play truth or dare; this was our haven and a lot of it was due to the lack of supervision, as many parents were hard-working single mothers.

The red lines surrounding this complex indicate a cinder-block wall separating us form the middle class communities in the south. The blue line is a sewer gutter and the yellow line is a railroad track: these were our shortcuts and also escape routes. The pink frame shows where I did my first graffiti “bomb”, at the age nine-years-old, in 1999. I was heavily influenced by older peers and identified with many sub-cultures from punk, heavy metal, hip-hop, and sk8ing to smoking weed. I still remember watching from the school bus window the next morning as I saw a man buffing my “bomb”. It was on this same bus, at the same time as the whole nation, that I heard the announcements of the 9/11 attacks. That’s me around the same time wearing the black Zero skull shirt.

To note my mother had cancer during this time and she battled it through as a single mother while also running her business in Los Angeles. I was getting very rebellious and into a lot of trouble, and eventually got my mom and brother kicked out of this apartment complex. My behavior got worse and we were forced to move to another apartment and school.
The dream of owning land and home becomes a reality taken over by mortgages and equity loans.

Our first home was two-blocks away from the 1994 Northridge earthquake’s epicenter, and it cracked the home’s foundation in half deeming it unlivable; earthquake insurance was optional, our home was foreclosed.
From then on, we moved between various apartments and leased homes. It was rather a chaotic time, and in parallel my dad was renovating an abandoned home with a plot of land that a Korean bank liquidated and sold for really cheap. When it was finally finished we moved in and soon after my parents divorced and the house foreclosed. Luckily my mom still owned the land. Around 2000, my father had a project to build two houses (the two adjacent homes on the right) on this plot of land. I was unaware of this project-it was completed in 2003.

My mother was the owner of the homes and sold one to pay off the construction loan. We eventually moved into the northern most home around 2005. The sense of having a home forever felt close to being reality. Looking back throughout my years in Los Angeles we moved about nine times altogether - once every year and a half.

Unfortunately there was still some mortgage being lent by Countrywide, who practiced discriminatory and predatory lending practices that would contribute to the 2007 financial housing crisis and hurt entire communities nationwide. During this financial crisis in 2010 my mother’s cancer recurred a second time, after 14 years of being cancer free. Countrywide later sold our mortgage packaged with all the other “toxic mortgage loans" to the Bank of America which foreclosed on our home in 2011. Since that time, this home has been sold over and over again, being bought, renovated, sold and resold.
References
http://www.consumeraffairs.com/countrywide-news
http://www.businessinsider.com/bank-of-america-settlement-with-department-of-justice-335-million-2011-12?IR=T
After the fall of Soviet Union, the Land Law in Mongolia transformed the nomadic society by claiming plots of land.

My Los Angeles dreams traveled in deep time to find my tribe forever traveling east to a land exposed by colonial genocide. As a child I always questioned the need to feel cold when there was desert and constant sun. A vivid childhood dream of mine consisted of traveling with a tribe following the mammoths during a blizzard, headed east in the Siberian region. I remember an argument, an announcement that we should return back west and half the tribe agreeing. The next morning, covered in snow, some of my tribe died. Was it to meet and connect with all my Native American friends?

I acted upon my intuition to re-discover the Siberian region to find my roots. During the turmoil of foreclosure, I left Los Angeles on January 17th, 2012. I packed one bag and a portfolio case and went on my own nomadic journey, first traveling to South Korea. I learned about drawing invisible maps by drawing on the energy of mountains, the trail of the winds, the oceanic currents.

After my three-month visa was up, I flew to Ulaanbaatar in Mongolia to work with an artists’ collective called "Blue Sun”. I learned that after the fall of the Soviet Union, Mongolia’s transformation to a democracy was very peaceful. The Mongolian Democratic Constitution passed a bill in 1992 that transferred state-owned land to citizens of Mongolia for private ownership. A revised Land Law bill passed in 2002, entitled the Mongolian citizens to 0.07 hectares of land in the city. The Blue Sun collectively claimed their entitlement and established the Blue Sun Art Village by using this Land Law.

During my three-month residency at "Design Park”, located in an old factory building, I worked closely with Yondonjunai Dalkh-Ochir, founder of the Blue Sun Art Village, and Ganzug Sebazzar. Inspired by my conversations with Dalkha and Ganzug, I began making a series of maps about the ongoing transformation of mining, rising city populations, and the desertification of the fragile biorhythms of the steppes. Blue Sun Art Village invited me to work on a plot of land but I was not allowed a visa unless I paid an equivalent amount of tax that the foreigners were paying working in mining industry which was about $300 a month. I drew simple plans for a small studio with a ger. To Dalkha: I’d love to have the series of maps I drew placed at the Blue Sun Art Village once it’s finished.
Reference
Art Camp 2012 - https://youtu.be/wE1nMlLMcuc
http://arthubasia.org/project/blue-sun-is-up-and-running
http://blog.hawaii.edu/aplpj/files/2011/11/APLPJ_11.1_myadar.pdf
http://www.anallp.com/land-law-of-mongolia/
The occupation of an island on the “Miracle on the Han River” in front of the National Assembly as a metonym for South Korea. 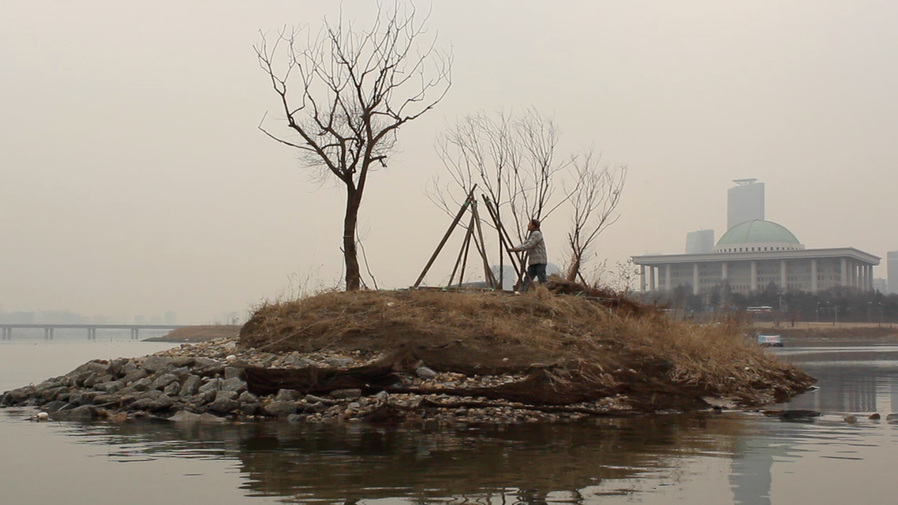 Video still excerpt: Political Island (2013), Two-Channel Video, Performance & Installation 11:21 & 14:10
In order to get a Mongolian visa, the protocol is to leave Mongolia and travel to the closest country. I was only able to go to South Korea by plane. Mongolia is landlocked by Russia and China, and any attempt to get into these countries becomes politically difficult and nearly impossible as an American. Ganzug and I went to Korea, he was invited to take part in a residency program “Community Space Litmus”.

While I stayed at a different residency called “Mullae Art Space”, I became more motivated in finding the reasons why my grandma left South Korea for Los Angeles in the late 60s by boat, followed by my parents in the late 70s. I was eligible for a Korean citizenship and became a dual citizen in the fall of 2012.

During the previous trip to Korea, before I left Mongolia, I discovered that my grandma had a cousin who was a Democrat and a political leader. He had led a sit-down strike in the National Assembly in 1958 due to controversial amendment laws on National Security passed by the Liberal Party. His actions eventually led to the overthrow of the first president Syngman Rhee during the student protests of corruption, now remembered as the April 19th Revolution, that overthrew Rhee’s presidency. During the free elections, this relative had become elected as Seoul Mayor, in 1960, but eight months later he was imprisoned during the coup d’état by General Park Chung Hee, and was blacklisted from politics. Park Chung Hee created a legal regime after he passed the Yushin Constitution in 1972, but was later assassinated in 1979.

The South Korean regime engineered a nation through complete domination in all sectors of life, through government education, mandatory military service, and the privatization of industrial sectors through family-oriented hierarchal conglomerates. It opposed any form of protests by imposing martial law by deeming them Communist and a threat to national security. There were many human rights violations upon labor union workers and students, and many political protesters were jailed, severely tortured and silenced for the sake of capitalist production and the reign for absolute authority in Park Chung Hee’s alternative modernity.

And so, after losing our family home in the Unites States of America and now finding myself in self-exile in South Korea, I claimed an island in front of the South Korean National Assembly and set up a teepee using found materials in the area. I created a “political island”: a country that can only be reached by sea or air yet connected and bordered by the DMZ to the mainland of the Asian continent.
Reference
https://en.wikipedia.org/wiki/Miracle_on_the_Han_River
https://www.academia.edu/13903740/Miracle_on_the_Han_River_Success_Story_of_South_Korea
http://www.stern.nyu.edu/sites/default/files/assets/documents/con_047356.pdf
﻿﻿The global social processes are mapped by indicating resources, politics, historical time,and poverty. ﻿﻿

Arjun Appadurari notes, "… the Pacific Rim is certainly a better way of thinking about certain regions today, rather than splitting up East Asia and the Western coast of North America. But a further question is: How do people in Taiwan, Korea, or Japan think about the Pacific Rim, if they think in those terms at all? What is their topology of Pacific traffic?” When I reflect on the process of my work, I realize it travels through the geography of the Pacific Rim and its “globalized grassroots and research imagination”.

I would like my work, as a form of hyper-abstract-heavily-layered-cartography, to capture some of the site-specific memories of this region. It seems natural that these documents, these accelerated maps, should be rolled up in a tube, transported, shipped, displayed and deinstalled, creating their own lines marked by travel. I wonder whether if their marks will fade and their bodies become frail; if they are preserved, will their frames become beautiful coffins, in the hands of an individual, or in some institution, whose own mode of movement and accountability becomes opaque?

Duke Choi (b. 1989) a Korean-American received his BFA degree from the California Institute of the Arts (CalArts) in 2011. He worked with the Blue Sun Contemporary Artist collective in Mongolia and worked on throat singing and cartography. In the late fall of 2012, he received his Korean Citizenship and began to investigate the personal history and extensive research project of a distant relative who was a prominent activist during the dictatorship and jailed during the 61’ coup. Duke's work investigates the constant political discourse of the geostrategic position, coined as a “Political Island”,  which theorizes the relationship between human and water and the ﻿inevitable ﻿creation of borders that is in a constant ever changing form connected to resources, politics, and economy.

Duke is currently in Switzerland writing a thesis at the Geneva University of Art and Design in the CCC research based program (critical curatorial cross-cultural, cybermedia studies).