The Constant State of Emergency

Questioning the non – functional and marginalized, I am interested in rediscovering  the incidental and seemingly unimportant fragments of the ordinary. Performance can be a very non directive action that embodies a certain state, sometimes to its absurdity. In this sense I use the body to enter in a symbiotic relation with the space where the performance takes place. By merging myself into the specific space, the mere persistence of my existence creates resistance.

In 2017 I began a series of public actions which resemble socially integrated riots or acts of demonstration with an important difference; I am not protesting against something or somebody, the message is not given in a form of an objection, and my goal is not to achieve the external chance.

The series started with a public action in the street of Montelupo, Firenze as a part of a 3 days Performance Art Festival. I walked down the street and sat down in a spot for an hour, putting myself in the position of a beggar. With the transparent saying, "Please I want more", the intervention portrays the paradox, called enantiodromia by Carl Jung, that refers to the process of converting something to what it's not. With begging for more in different locations, I created a dialogue with the public at that specific point. By using my body and position I am turning something to its opposite so that it can once again become what it used to be. 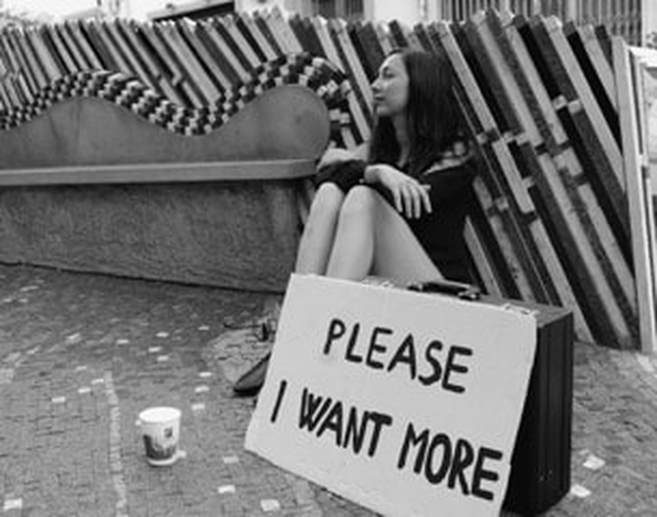 Ana Mrovlje, based in Ljubljana, Slovenia, works in the fields of visual and live art. She uses the individual experience as the main medium of her works. Through her art installations and live acts, she draws on ideas and subjects related to the unconscious mind and its encapsulation in the human body. She studied and specialized psychoanalysis at the Sigmund Freud University Vienna and has a background in sculpture. In her projects she aims to trigger a seemingly unconnected chain of associations in a person’s interchangeable perception and offer the viewer a distinctive synthesis in the artwork itself. Through her close investigations of the psyche she questions how individual’s sanity is related to the collective insanity. Each of the projects is a transformative encounter, binding the materialized work with the content. Art has the ability to express what language can not. In her works she provokes the lines drawn between the constructed social perspectives and the prevalent standpoints of individuals by reflecting the blind spots of both. Recent works include: 2017 Performing Art 3Days: The Constant state of Emergency (Please I want more), performance, Gallery Fornace Pasquinussi, Florence, Italy; 2016 SIT DOWN AND DEAL WITH WAR INSIDE YOU (interactive performative installation), Caos Gallery Venezia, Venice, Italy; and 2016 TABULA PLENA Lose Your Labels, performance, Carrozzerie N.o.t., Rome, Italy.

Location: Between Present and Future