Before 1970 the immigrant population of the United States of America's Southern region, the South, was less than one percent. Over the past few decades that number has surged and today in Virginia (where I grew up) almost one-fifth of all native born children have a foreign born parent. As the region’s identity evolves and becomes more global and diverse with each generation we must re-examine the lingering presence of Confederate symbols that proclaim heritage. These images not only remind us of the region’s troubled past, but they also perpetuate the romanticized myth of the Lost Cause; they cling to an alternate reality, frozen in time. Being raised in a small town known for its prominent role in Civil War history, I —  a mixed-race, second generation Korean American — was taught to revere a past to which I felt no connection. Despite this, over the course of a my childhood I grew to call this place home, and found my own sense of self as a Southerner.

Hometown Hero (Chink) is a multi-part installation originally consisting of three parts: a single channel video, a custom upholstered recliner, and a fabric-covered room furnished with other upholstered items. The video Twinkies, Wasps, and Avatars attempts to deconstruct and reconcile the identities of “Asian American” and “Southerner.” Meanwhile the large recliner, with its imagery of the Confederate flag, looms and dominates the space. It sits facing the television, acting as a physical stand-in for the desire to return to some abstract past version of America - the wish to “make America great again.”

The work reveals hidden personal histories, allowing others to peer into a space that many like me occupy: a state of psychological exile, of in-between, of longing yet not belonging. By challenging the notions of heritage, Southern nationalism and “traditional” American culture, I hope to facilitate honest conversations regarding race, alienation, and assimilation. 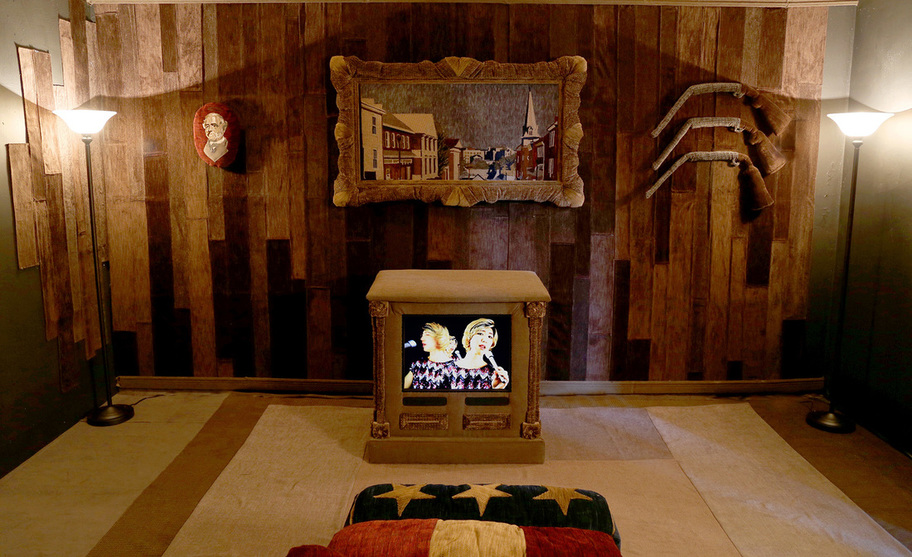 In this reimagining of Hometown Hero (Chink), I’ve taken the video and the recliner and re-placed them into an environment that would heighten and amplify their message: The Virginia State Capitol building. Using publicly available images, I’ve created 360-degree videos to represent the new settings for my work.
NOTE: You will need to use either the Chrome browser or a mobile device with the official Youtube App in order to view the 360 videos correctly. You may also use a VR viewer (such as Google Cardboard) if you have one available.

On the second floor of the building sits the room in which Virginia voted to secede from the Union in 1861. In that same room is a large bronze statue of Robert E. Lee commemorating his role in the Civil War. My recliner would sit squarely at the front of the room, facing General Lee and the empty chairs of the delegates that voted for secession. Would the addition of the Confederate flag — unavoidably emblazoned on the tacky modern-day recliner — help remind us of the underlying message of white supremacy that such memorials perpetuate? Would we be able to see past the classical architecture and the refined details of the room to see history for what it truly was?

Immediately connected to this room is an atrium filled with the busts of famous Virginians. George Washington stands at the center of the room. Here I would place my video, a floor to ceiling projection, amending this all-American, all-white, all-men’s club with its newest member.

Valery Jung Estabrook is a multi-disciplinary artist from southwestern Virginia. She received her MFA from Brooklyn College and her BA in Visual Art from Brown University. Her work has been shown in New York, Baltimore, Providence, and Virginia. She currently resides in Taos, New Mexico.