On the Ideals of David Smile
by Comic Sans

In 2011, Dr. Daryl J. Bem of Cornell University presented evidence that future events can affect present cognition. Conducting a reverse memory test in which subjects recall words from a long list, then memorize random selections from that same list afterwards, Bem’s results showed that subjects were more likely to recall words in the present if they were memorized in the future. Nine other analogous scenarios mapped this same result, surmising the actuality and potential of precognition.

David Smile, director and author of The Prescient Image Group of New America, practices in this same space of psi, giving anomalous processes of information or energy transfer – which have no material explanation – physical applicability. Utilizing the medium of the focus group and the subject of image, Mr. Smile’s research infers the nature and tokens of future imagery through situational reactions to present aesthetic devices.

In June 2015, Smile developed what The Prescient Image Group of New America listed as the Visibility Quotient, a multi-dimensional graph modeling at what point the accessibility of an image begins to dampen its impact. Soon after, both Smile and his company were erased almost completely from the Internet, their facility in Santa Fe, NM quickly and cheaply listed on the market, later bought up by and transformed into a Talbots outlet.

A possible result of his quotient’s calculations regarding the visibility of The Prescient Image Group, Smile’s disappearance serves as his last prediction for the future of imagery. The scarce remaining evidence of his group’s activity reinforces his final public gesture, concerning ideal spaces for image exhibition: a screen shot of The Prescient Image Group’s Eco-Exhibitionism project is shown below. 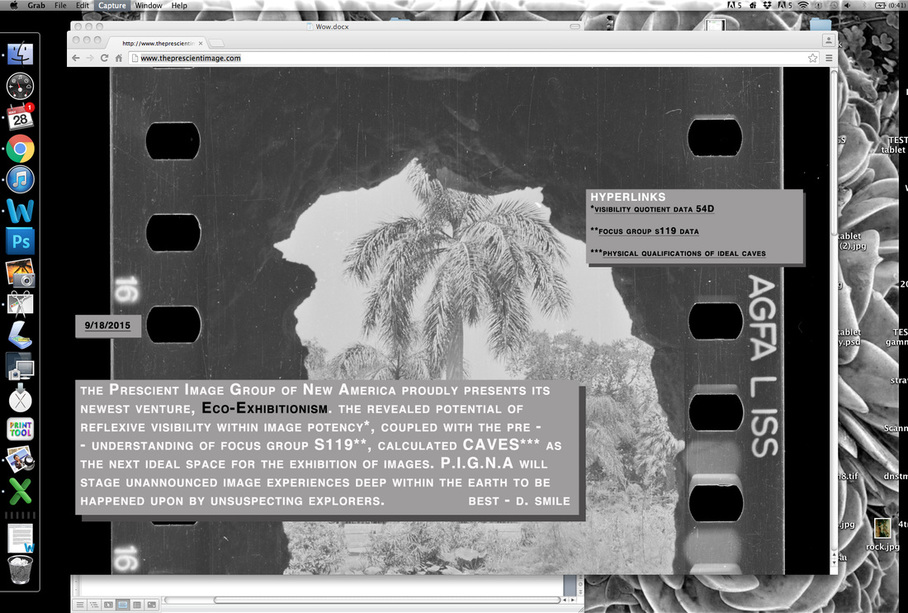 A screen shot of The Prescient Image Group's website during late 2015, no longer extant.
Though Smile and The Prescient Image Group of New America have – for the present – moved metaphorically and physically underground, hope for their reemergence lies in the described sine wave properties of the Visibility Quotient. In one of his rare quotes David Smile described the future understanding of image as muscular, stating, "Muscle tissue is strengthened by resistant pressure, but cannot heal without an ensuing period of rest. Images will soon be treated similarly, their visibility the tension, their invisibility the release. The result, strength."

Comic Sans is the alias of an established free-lance art writer, created to facilitate the unrestrained coverage of relevance within contentious subject matter and hyper-progressive material.