I imagine my drawing American Family: Florida hanging in the office of Florida governor Rick Scott.  Rick Scott believes in "traditional marriage and family". In hanging my work across from his desk, I would challenge Scott to consider the intersectionality of of race, ethnicity, class, gender and sexuality that is the expansive reality of the American family.

The two women in the image, Vanessa and Melanie Alenier, fought for state adoption rights in 2009 and won those rights in 2010.  Along with several other couples, they also fought for, and won, marriage rights for gays and lesbians in Florida in January 2015 - which led to federally sanctioned marriage rights shortly thereafter. The Aleniers are raising a son, Ethan.

American Family: Florida is part of an on-going project titled Project About Family. At its completion, American Family will be a series of 50 life-sized drawings on paper, each one representing an LGBT family from a different state. The drawings illustrate the everyday, ordinary moments in the lives of families headed by LGBT parents - moments that point to the contradictions between sensationalistic public discourse and lived reality. 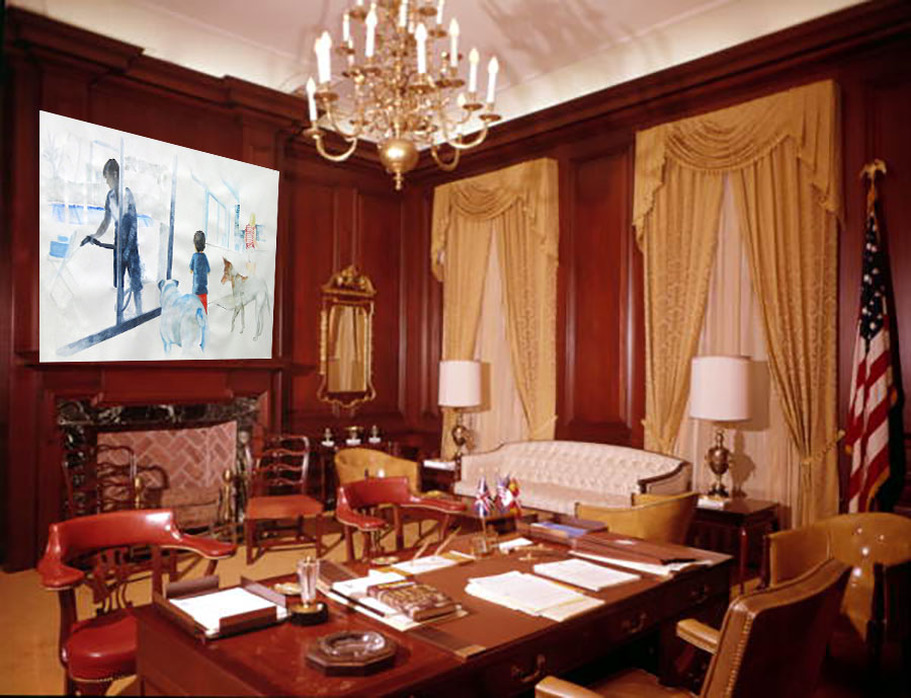 American Family: Florida ,watercolor and graphite on paper, 72" x 121", 2012
Kim Russo has exhibited her work throughout the United States and in Ireland.  Her work is in the permanent collections of the New Mexico Museum of Art in Santa Fe, The Cornell Fine Arts Museum, and the Paul and Lulu Hilliard University Art Museum at the University of Louisiana.

Russo has received residency fellowships from the Frederick P. Lenz Foundation, Caldera, Atlantic Center for the Arts, and Americans for the Arts.

Born in Darby, Pennsylvania, a suburb of Philadelphia, she received her BFA from Tyler School of Art (Temple University) and her MFA from Indiana University, Bloomington, both in painting.