In Hebrew, the Western Wall or Kotel Hamaaravi, in Arabic, Place of Weeping or Buraq Wall, in English, the Wailing Wall is a relic from the Second Jewish Temple. It is a wall situated on the western area of Temple Mount in Jerusalem, running 187 feet | 57 meters long, and 62 feet | 19 meters high. The wall consists of 45 stone courses, 28 above ground and 17 underground. For the vast majority of the Second Temple era, the Jews were subject to foreign rule: by the Persians, the Greeks, and eventually the Romans, who in 70 CE retook Jerusalem and destroyed The Second Temple. The wall was all that remained, never a part of the actual temple but instead an outer structure that surrounded the Temple Mount. For the Jews, however, The Western Wall became the holiest spot for prayer because the gate to heaven is believed to be situated there. Throughout the centuries, Jews from all over the world made the journey to Palestine to pray to god on the Kotel Hamaaravi. In Hebrew, the name Wailing or Weeping Wall was never accepted. There is a much publicized practice of placing slips of paper containing written prayers into the crevices of the wall. More than a million notes are placed each year and the opportunity to e-mail notes is offered by a number of organizations. According to Jewish law, prayer notes may not be thrown away. Twice a year, Rabbi Rabinovitch and his assistants collect the notes left in the Wall and bury them in the Jewish cemetery on the Mount of Olives. After 19 years of Jordanian control, the Western Wall | Place of Weeping | Wailing Wall came under Israeli control during the Six-Day War in 1967. Brigadier Rabbi Shlomo Goren proclaimed after its capture that "Israel would never again relinquish the Wall,” a stance supported at the time by Israeli Minister for Defense Moshe Dayan and Chief of Staff General Yitzhak Rabin. Forty-eight hours after capturing the wall, the military proceeded to demolish the entire Moroccan Quarter, which stood 13 Feet | 4 Meters from the wall. The Sheikh Eid Mosque was pulled down and 619 Palestinian inhabitants were ordered to leave their homes overnight. When they refused, bulldozers began to demolish the buildings with people still inside. The narrow pavement, which could accommodate a maximum of 12,000 per day, was transformed into an enormous plaza which could hold in excess of 400,000. The new plaza is used for worship and public gatherings, including bar mitzvah celebrations and the swearing-in ceremonies of newly full-fledged soldiers in the Israel Defense Forces. Tens of thousands of Jews come to the wall on the Jewish holidays, and particularly on Jerusalem Day, which commemorates what Israel sees as the reunification of Jerusalem in 1967 and the occupation of the wall by Jewish hands.

I decided to carve out the word DEFENSE on the most holy wall in Judaism to signify its duplicate use as a tool for occupation, separation and ownership. Today, in the state of Israel, walls are being built under and above the ground to continue the social, cultural and military totalitarian occupation of Palestinians. With this act of carving out a word by removing a few stones from an ancient wall I would like to ask:

How does the notion of defense shape our becoming? 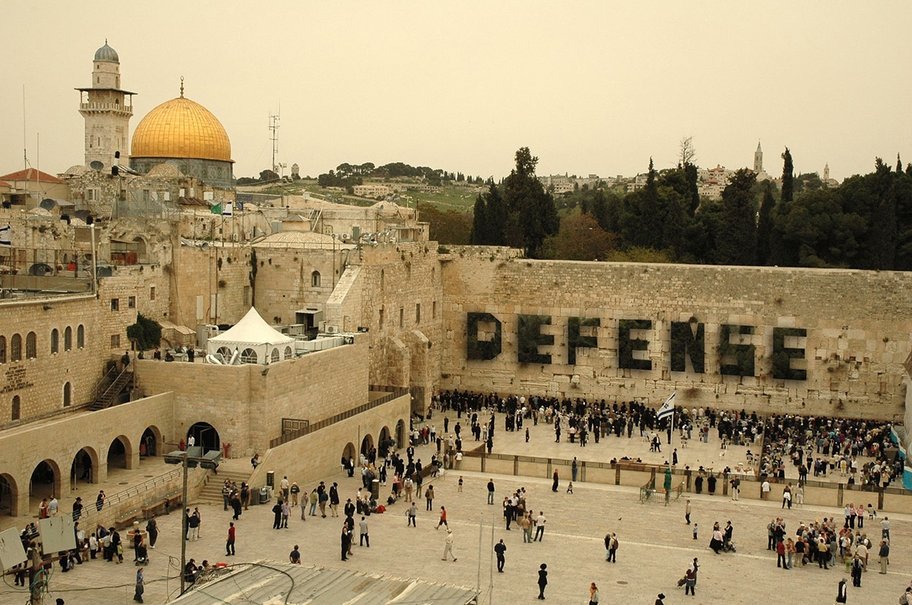 In Israel we have two types of Sirens:
Azaka | Alarm and Tzfirat Hargaah | Soothing Siren, signifying All Clear
The Alarm siren is used to warn of air raids or missile attacks on the civilian population, and consists of a continuous ascending and descending tone.
The All Clear siren is a continuous single pitch that is used to let people know when the danger is over. In addition, the All Clear siren is used three times yearly to denote a one or two minute silence, once on Holocaust Remembrance Day and twice on Day of Remembrance for fallen soldiers and victims of terrorism. Growing up in Israel, you are always aware of two things: where the siren pole is located and where the shelter is located. I would like to use the siren poles for the purpose of playing to Israel my beloved to the entire state. to Israel my beloved is a 9:49 min audio piece in which Israel is written of as a person. It is a break-up that can never be complete, and a love that can never be fulfilled. It is a dream space that intertwines fear and pain with recognition and hope. 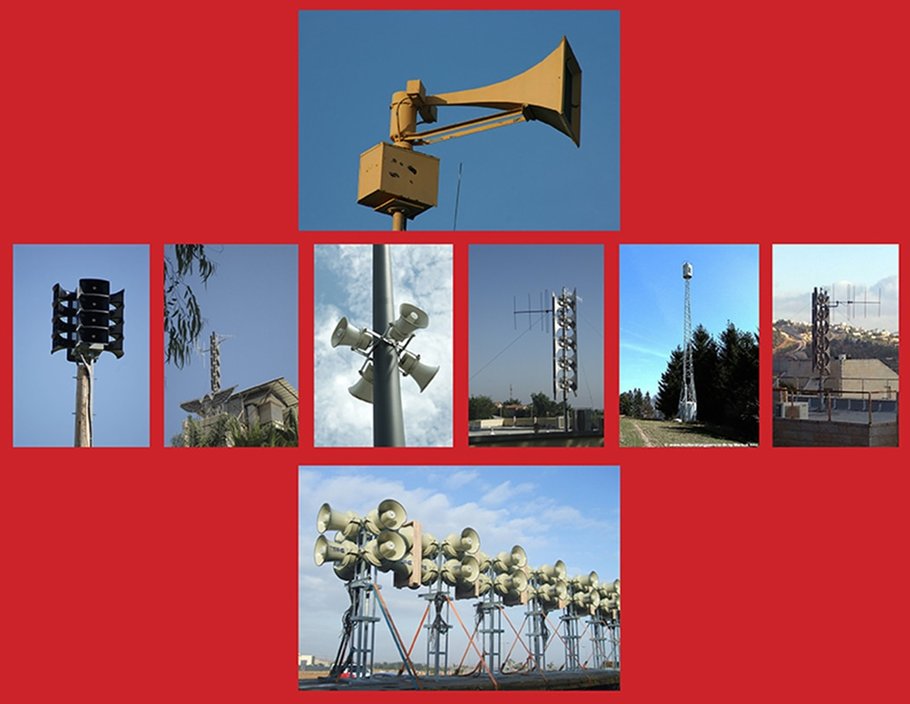 Born in 1984, in Tel-Aviv Israel, Meital Yaniv is an interdisciplinary visual artist writer and filmmaker currently working in Los Angeles. Yaniv’s practice is built on a visual dialogue that bridges the personal and political conditions at the core of her origin. Yaniv conceives alternative practices for re-experiencing traumatic events through mirroring the other. Her book, Spectrum for an Untouchable, was published in October 2016. Together with Eve LaFountain and Ali Kheradyar, Yaniv initiated the conversation series, Feminism Today in May 2013. Her work has been exhibited at LACE, LAST Projects, PØST, Photo LA, Cirrus Gallery, Shulamit Gallery, Raid Projects, For Your Art Gallery in Los Angeles and The Alice Gallery in Seattle. Yaniv holds an MFA from California Institute of the Arts and a BFA from Bezalel Academy of Art and Design.