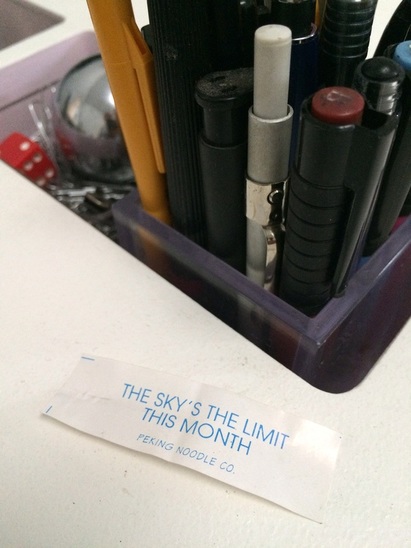 Somewhere along the line, I began thinking of each sunrise and sunset as the visual equivalent of the daily news.  Faced with the pressure of producing a morning and evening edition, I pictured God huddled over some drafting table, or at an easel–a cross between Bob Ross and the movie version of a 20th century newspaper editor.  Each new creation was then screened for a worldwide audience, reminding them of the promise of a new day, or bringing the last flickers of daylight to their eyes.
With that in mind, I think the idea of guest editing a sunset is an appealing challenge as it ticks off a lot of the boxes an artist might be interested in.  I can see the listing now:

What would it be like to stand in the middle of a painting that was changing all around you as the light and wind shifted? Would individual colors radiate light? Would certain objects cast shadows on others? The thing that appeals to me most about this proposition is the way space would be approached.  With no horizon line in the sky, the idea of linear perspective gets tossed.  We could only speak of an object being in front of another, or perhaps larger than another.  Yet even these descriptors are limited relative to your location.
Then there’s the whole part of seeing your marks miles wide.  I could go on and on.  I wonder what pilots think of when they streak across the sky, leaving behind trails like vine charcoal on soft press watercolor paper, studio assistants for the EIC, prepping the under painting for the evening edition.

Los Angeles based artist John Trevino was born in 1972 and raised in Long Beach, CA.  He received his B.A. in Black Studies and Art Studio in 1995 from U.C. Santa Barbara and MFA in painting from Howard University in 2000.  In his work, Trevino pursues information that is acquired from personal experiences, observations, and reflections on the surrounding environment as a way of documenting aspects of contemporary culture.  Working primarily in painting and mixed media, Trevino feels the range of these materials mirror the diversity of his experiences and allow the artist the flexibility and freedom to visually navigate this territory.  Most recently his work was selected as part of the Metro Silver Line project and is featured at the USC/37th St Station.