My work examines the underlying resonance of childhood: limitlessness, inventiveness, mystery, imagination, adventure, and possibility. A variety of approaches have enabled me to explore the act of playing that has become an important process in uncovering the metaphors of home and self, when fantasy meets reality: painting, sculpture, printmaking, and photography, to name a few.

For this project I chose the remains of a dollhouse I spent six months building from scratch in 2011 while in grad school. During the process I noticed that the house captured light in such a way it looked like a real space, thus the illusion of the real and the meaning of home became my aesthetic and conceptual inquiry. I spent months building the house, adding every detail I could imagine to make the house look and feel more real only to jackhammer a gallery floor to encase the house in resin. When the show was over I sawed the house from the resin not knowing if it would survive. Surprisingly, though damaged, it did stay in tack.

After grad school the house continued to evolve with my work. The house was used in numerous sculptures, constantly evolving into new works of art. For example I used it behind a wall where you could only see parts of it through a peep hole, it was incorporated in a sculpture I made out of pipes and tree branches as it sat a top of the pipes, and most recently it was built into the interior of a larger sculpture as a house inside a house inside a house. 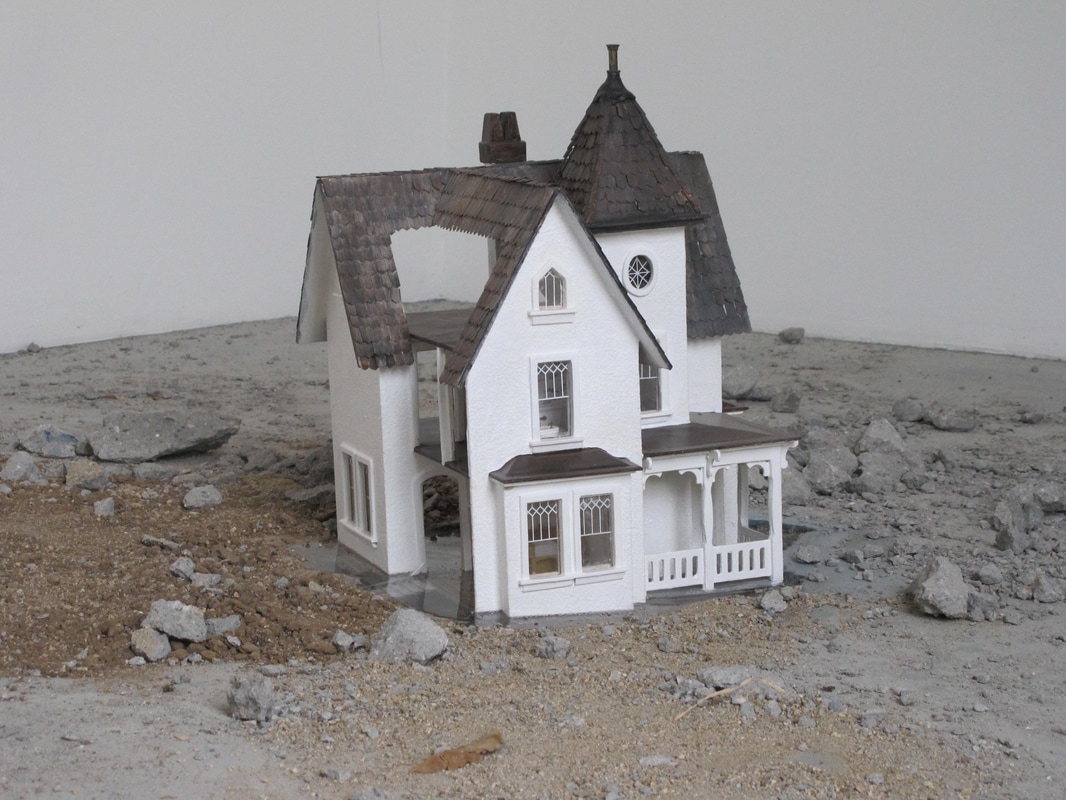 In my work Children’s books and fairy tales are often the threads of inspiration that flow in-between the layers. This is why I chose a fern forest for my ideal final destination for the remains of the “white house,” because for me nothing is more magical then a fern forest.

I would place the house on a pedestal encased in a glass box, a metaphor for “Sleeping Beauty.” I love the idea that one may stumble upon the work while exploring through the forest, bringing the magic of the house alive once again through discovery.

Ashley Hagen was born and raised in Ames, IA. She received her BFA from the School of the Art Institute of Chicago, and her MFA from California State University Northridge. Her work has been exhibited throughout the U.S. and Europe, including shows at Western Project, Andrew Shire Gallery, The Prospectus,  Art Platform -Juried by Ali Subotnick of the Hammer Museum for Boom, The University Art Museum, Long Beach, The Irvine Fine Arts Center, Deborah Martin gallery, Galerie dei Barri, Cerritos College Art Gallery, and Palais Ferstel in Vienna, Austria. She lives and works in Los Angeles.