My Prime Property for my art is Kraków National Museum in Poland, which was first housed at the upper floor of the Renaissance Sukiennice building located at the Main Square in the Kraków Old Town, now home to one of its most popular divisions in the city. The construction of the Museum's contemporary New Main Building located at 3 Maja Street, started in 1934, but was interrupted by World War II. It was fully completed only in 1992, after the collapse of the Soviet empire. 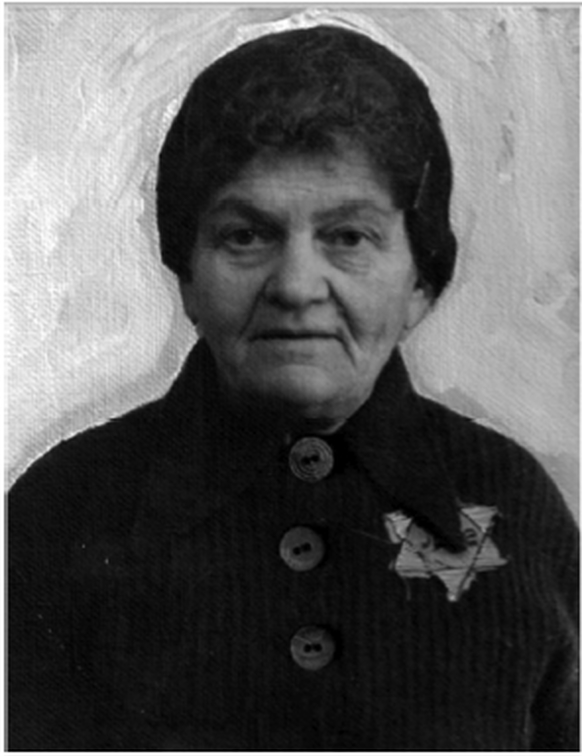 סבתא גילה Savta(Grandmother in Hebrew) Gila 1979
The image of my Grandmother was only a negative when I got hold of it and it is still the only image that I have of her. I would try to put myself in her place, imagining what would it feel like to be branded by having the star of David sewn on each garment I own.

The Herstory/Four Generations Female X-Chromosomal Inheritance Lineage 2012
Herstory/Four Generations Female X-Chromosomal Inheritance Lineage is an attempt to connect four generations of her-story and our genetic heritage. My mother was born to an Orthodox family as one of six daughters. With the rise of Anti-Semitic tendencies in Europe at the age of 22 she left Poland and moved to Palestine without her parents’ approval. My mother kept the last postcard she received from her mother in her jewelry box. It was written in German and she used to occasionally read it, “Dear daughter” it said, “this is the only time I am happy you didn’t listen to me.” My grandmother, as far as I know, was mass murdered in a communal grave in Chrzanow Poland not long after that. I left Israel in 1973 with a one way ticket to Europe. My daughter was born in California in 1991 through donor conception to lesbian parents. Looking at the four of us one might notice that:

We were born in three different continents: Europe, Asia and America

Three of us don’t share the same native tongue

Two of us never had the opportunity to meet

But, despite all that an X Chromosomal lineage and a sense of belonging connects us all.
Rachel Finkelstein is a multidisciplinary feminist/lesbian artist. She is a co-founder of Circles, the first women’s film distribution group in the UK.  Her work has been widely shown in Europe and Israel in such venues as the London Film Makers Co-Op, The Midland Group, ICA Cinematheque, A Women’s Art Space, Half Moon Photography and Museum of Modern Art Oxford. Recently she has been part of the organizing team producing Suzanne Lacy’s Three Weeks in January (2012), as part of PST performance and Public Art Festival.  She was also part of the performing team recreating the Myth of Rape & Lieberstod. Currently a member of The People’s Microphony Camerata (PMC) which is an experimental choir based in Los Angeles and WCA Southern California. Rachel Finkelstein received a BA from St. Martin’s College of Art and a MA from the Royal College of Art.
A.H.C