I started working on an “asshole megaphone” idea in the summer of 2015, when Donald Trump first announced his presidential candidacy. The Donald Trump(et) – as it was ultimately named – was finished in September 2016. Formally, the sculpture is a bronze megaphone capped with a cast of an anus plated in 18K gold. The artwork was originally exhibited in my solo show “The Assonant Armory” (Sept. 24 –Nov. 5, 2016) at the Los Angeles gallery Commonwealth & Council.

Although my work often involves levity, I rarely create an artwork solely for humor’s sake, and this was no exception. Other sculptures in “The Assonant Armory” amplified the human voice. The Donald Trump(et), on the other hand, does not allow any sound to pass through it. The constricted anus at the end of the megaphone effectively mutes it. I do not believe the anus to be an inherently negative part of the human body, but I do revile the act of “talking out of one’s ass,” of which Donald Trump appears to be a master.

When Our Prime Property gave me the opportunity to envision the ideal permanent exhibition location for this sculpture, candidate Trump was President-elect Trump.  Given that unfortunate circumstance, it then seemed only fitting that the sculpture become a central part of the future Donald J. Trump Presidential Library.

In collaboration with my husband, designer Jean-Paul Leonard, we envisioned a satirical take on what that presidential library might be (the Donald J. Trump Presidential Library, Resort and Casino?), but quickly found that it’s impossible to satirize a satire. Worse than that, to create an architectural proposal that exists on the cusp of reality would be to normalize an individual and an incoming administration that are uniquely dangerous to free speech, art, journalism, immigrants, women, the LGBTQ communities, minorities of any kind, and the human spirit in general.

Once we subtracted the notion that the namesake of the library would have any influence on the facility’s appearance or programming, that freed us up to conceive of the library as a critique of the future president. The Donald J. Trump Presidential Library would then best serve the public good as a sobering space for future generations to reflect on the dangers of oligarchy, fascism, racism, misogyny, homophobia, xenophobia, eco-terrorism, celebrity, nepotism and greed.

The library will be sited in the rust belt of the United States, in an unmarked field. Visitors arrive through a subterranean parking garage, and the entirety of the complex will similarly be buried deep underground, in a complete absence of daylight. Only at the far end of an exit tunnel will sunlight be visible. In this dark environment, The Donald Trump(et) will be displayed beneath a grand double staircase designed to squat directly over the sculpture (and all visitors arriving to the facility). A perpetual waterfall – its water sourced from the corrosive Flint River – will emanate from the crotch of the twin stairs, completing this contemplative arrival point to the library.

Traditional flooring will be eschewed for barren dirt, with visitors advised to wear heavy boots or galoshes to navigate the muddy dank floor of the library. Eventually, hundred of years from now, my sculpture along with the entire collection, will rust, decay and be absorbed back into the earth. In that future, the Donald Trump presidency will only exist as a saga, a myth, a folk story or a cautionary tale. 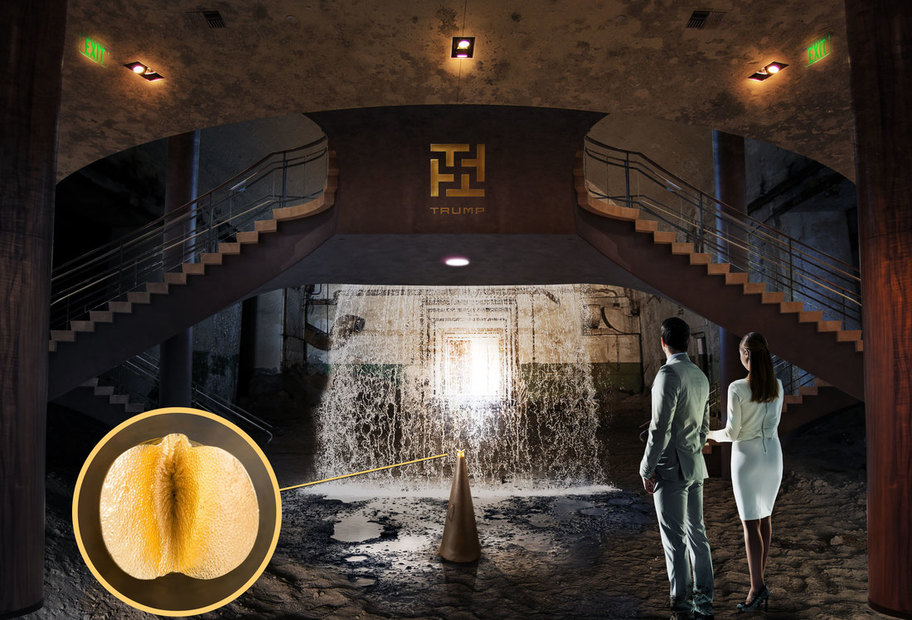 Elana Mann’s artwork focuses on the act of listening as a potent political act. She has explored active listening in a wide array of settings from private performances in intimate spaces to public installations in city parks. Her exhibitions are often participatory, involving sculpture, collage, performance and/or community programing. Mann received her BFA from Washington University in St. Louis, St. Louis, MO and her MFA from California Institute of the Arts, Valencia, CA. Mann lives in South Pasadena with her partner, Jean-Paul Leonard and their son.
elanamann.com

Jean-Paul Leonard is a designer for film, television and digital media. Jean-Paul is a graduate of the American Film Institute Conservatory and a member of the Art Directors Guild. He is the owner of Company Wide Shut, a creative resource to the entertainment industry since 2001. Company Wide Shut's recent work includes main title designs for Amazon's Transparent and Netflix's One Day at a Time.
www.companywideshut.com